Use this guide to get the most from your visit to St Thomas’s.

You’re now standing in an ancient medieval church building, with its famous doom painting and many other odd and interesting treasures. It’s not a museum – it’s a church.

A church is people, and you may see us using it for services, concerts, a cafe, a bookstall, whatever. You’re welcome to join in, or just wander about and look at its treasures or sit down and quietly ponder and pray.

To see its treasures use this map. Each number is keyed to a feature inside the church. The red star on the map shows you where to stand to see it. We are trying to raise money to restore St Thomas so that it’s more beautiful and more functional, in a campaign called ‘Quest 2020’. At a few points in this guide we’ll tell you what we’ve done so far and how we’re planning to restore other features. 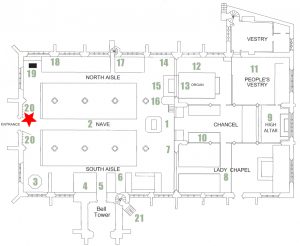 1 The ‘Doom’ painting (c1470): With your back to the main door, look up and you’ll see the newly-restored ‘doom’ (judgement) painting – the largest of its kind in England. Jesus sits in the middle on a rainbow, with the 12 apostles at his feet. On his right (our left) angels are helping the dead to enter the new Jerusalem, or the medieval idea of the new Jerusalem, which is arrayed behind the seated figure of Jesus, while on his left demons drag the damned towards the mouth of Hell, here shown as a dragon. Read more …

2 Somerset angel roof (15C): Look up higher and you will see the Somerset nave roof with six king-strut tie-beam trusses. With moulded principal rafters, the trusses form eight large panels in each bay. At the centre of each tie-beam is an angel bearing a shield or scroll. There are more than 250 angels decorating the inside of St Thomas’s. That is why we call it “the church of angels”.

Thanks to the generosity of those who gave to our Quest 2020 restoration fund, two of the ceiling panels were restored while the scaffolding was up for restoration of the doom painting. It’s hard to see them so high above your head, so here is a photo of one of them: 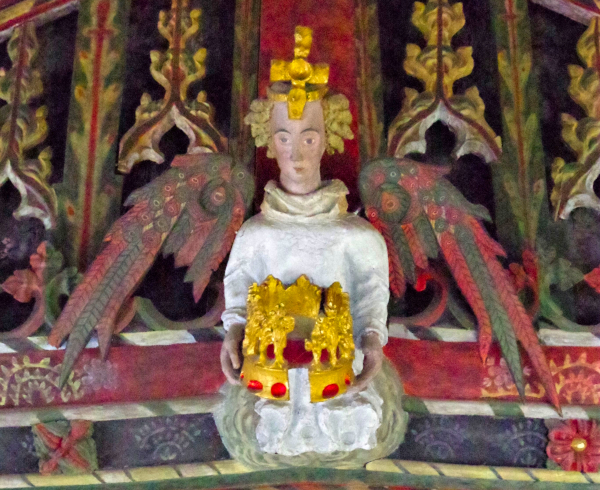 Even more interesting is this tricephalous Trinity (below). a carving of ‘three faces in one’, a feature in churches between the 15th and 17th centuries, until they were banned by Pope Urban in 1628.This remarkable carving has lain undetected beneath layers of grime and varnish for hundreds of years. If you can’t spot it, please ask one of our welcomers to point it out to you. It looks like this: 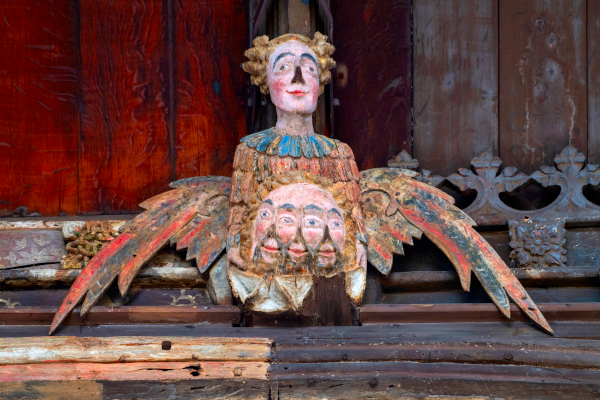 Looking up, you can also see the clerestory windows, that help to make St Thomas’s interior such a bright place in the daytime, especially when the sun is shining. This is a wonderful example of English Perpendicular church architecture.

Restoring the clerestory and roof

3. Font (19C): This Victorian font with a carved wooden top is where we welcome new Christians by baptising (christening) them with water. Parishioners and friends erected the font in memory of the Revd William John Birkbeck, Vicar from 1894 to 1898.

4. Beckham panel (17C): This large oak panel was carved in about 1660 by Humphry Beckham, a local joiner. The left half shows the sacrifice of Isaac by Abraham; the right is of Jacob’s dream of the ladder to heaven (now missing) and of Laban and the parting of the flocks. In the background is probably Salisbury as it was in Beckham’s day.

5. Royal arms above door (16C): Queen Elizabeth I ordered all churches to put her arms over the chancel, and for centuries this was on top of the whitewashed doom painting. Roger Lovell made the arms around 1580, and Reynold Beckham (father of Humphry) made the frame. They show a gilded lion and dragon holding between them the coat of arms of Queen Elizabeth I framed within the garter and surmounted by a crown.

6. War memorial (2004):  In a wooden case is a remembrance book for the city of Salisbury that lists the names of the citizens of Salisbury killed in action since 1914 to the present day. The pages are turned daily. In the drawer is more information about them shown in different ways – alphabetical name order, rank held, unit, medals awarded, etc.

7. Stained glass, south aisle: This is a memorial to the memory of the officers and men who gave their lives from the parish in the Great War 1914-18. The window and the alabaster tablet recording the names was provided by public subscription in 1919-20. Read more

8. The Lady Chapel (16th C): In 1447 after the wall of the choir fell down and destroyed the chapel of St Stephen, the merchants and citizens of Salisbury paid to rebuild a new St Stephen’s Chapel, now call the Lady Chapel. Note particularly the beautiful perpendicular roof and its beams ornamented on each side with shields bearing the emblems of the Passion and the Trinity. Three centuries of grime have darkened the chapel, and we hope to be able to restore it to its former glory. Read more 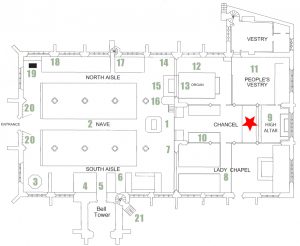 9. High Altar (19th C): The high altar dates from 1850-60, when much reconstruction greatly lightened the interior of St Thomas’s. The window above the altar was renewed in 1856 and depicts early Christian figures. The general colouring of bright reds, blues, greens and other colours is typically Victorian. More about the figures 

Behind the main altar in the chancel is a panel of Siena marble with the figure of Victorian architect G. E. Street and carved by Thomas Earp in 1868.

The eight paintings adjacent to the high altar portray two rooms of angels playing musical instruments. They were painted in oils on metal in the 19th century, but we don’t know who painted them. They are Victorian in style. The gathering looks like members of a youth orchestra on a musical outing. Because of their colours these were known by choirboys as the “mustard angels”.

11. People’s Vestry (16th C): The People’s Vestry is where we have the organ and our cafe kitchen and seating. It was built by members of the Godmanstone and Hungerford families and later became the chapel of the mayor and his brethren as the Guild of St George.

12. Lists. On the panels behind the organ are panels listing the priests of the two parishes of St Thomas and St Edmund. These two parishes were combined in 1974. The original church of St Edmund’s still stands and has become the Salisbury Arts Centre.

Also on these panels are listed the names of the churchwardens of both of these parishes. The word ‘vestry’ is used here to denote churchwardens.

13. Organ (18th C): Our three-manual Green organ was first given by King George III to Salisbury Cathedral, who gave it to St Thomas’s in 1877. It had to be cut down to fit in the smaller space available here. It has undergone restoration and enlargement over the years, most recently in 2021.

14: Statue of St Thomas (20th C): Standing in a niche in the north aisle is a wooden statue of St Thomas a Becket carved from a single piece of ancient beam taken from the church during a previous restoration. It was presented to the church in 1954. The niche previously held a statue of Becket that was destroyed during the Reformation. Read about an irony. 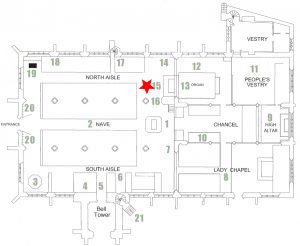 15. St George’s Altar (15th-16th C): By the organ is an altar of purbeck stone decorated with carved panels separated by smaller oblongs at front and rear dating from the late 15th or early 16th century. It was moved in 1971 from the central aisle of the chancel and dedicated as an altar to St George. Behind the altar is hung a glass-covered frame containing a valuable old embroidered panel which dates from the late 15th century and which has been restored by the Textile Conservation Centre. A paper describing it stands nearby.

The pulpit, a carved octagonal drum on a shaped plinth, was designed by Victorian architect G E Street as part of his redecoration of the chancel and its furnishing in 1865-70.

The nave altar is made of 1,152 staves of English oak springing upwards from a single copper base, representing individual members of the church emanating from one source to the cohesive whole of surface of the altar. More about the nave altar.

17. North door: There was originally a porch on the north side of the nave, but this was demolished in 1835 to save the cost of repairs. There was a room above this porch and there is still a doorway in the north wall leading to a stone staircase which now leads on to the aisle roof. It is said that at one time an alchemist lived in the room above the porch – and earlier an anchorite – and that he might, at times, be seen escaping through the small door at the foot of the steps from the noxious fumes of his experiments.

18. Mayoral shield: This antique coat of arms on a wooden base hangs on the north aisle wall. It has a curious history, having been bought from a local antique dealer in 1922 and taken over to Salisbury, Connecticut. In 1984 it was brought back to England and handed over to the city authorities. It now hangs here on permanent loan from the Charter Trustees.

21. Bell tower, clock and quarter jacks: It is generally believed that the tower was built in 1400 standing apart from the church. In the 15th century the north side of the tower became part of the new wall of the south aisle of the church. In recent times the ground floor of the tower has been converted to a room for prayer and teaching.

The tower has a ring of eight bells. Below the clock face are two quarter bells and two wooden figures (“jacks”) one metre high. They each hold a halberd and they rotate at each quarter and simulate hitting the bells, although in fact they do not. The bells are actually struck by hammers from behind. The jacks represent men in late 16th century armour.

Powered by WordPress  |  Compass by InkThemes.